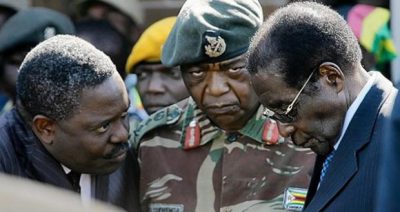 “To both our people and the world beyond our borders, we wish to make it abundantly clear that this is not a military takeover of government. As soon as we accomplish our mission we expect (the) situation to return to normalcy.” – General S. B. Moyo

On the evening of November 14, 2017, senior elements of the Zimbabwe Defence Forces (ZDF), seized control of the Zimbabwe Broadcasting Corporation and other areas of the city of Harare. On November 15, 2017, the ZDF issued a statement that, it was not a coup d’état and that President Robert Mugabe was safe, and the situation would return to normal after the ZDF had dealt with the “criminals” around Mugabe responsible for the socio-economic problems of Zimbabwe.

There has been a long and unsolvable factional conflict within Zimbabwe’s ruling ZANU-PF which exploded on 14 November, 2017 in a military intervention that seized control of the government and state media. The coup was led by Zimbabwe Defence Forces Commander, Constantino Chiwenga, who is alleged to be aligned with former Vice President Emmerson Mnangagwa who was sacked by President Robert Mugabe.

Exploiting the diminishing health of President Robert Mugabe over the years, Emmerson Mnangagwa who served as one of Zimbabwe’s Vice Presidents, carefully planned his succession to President Mugabe. He used his position to build support base within the ZANU-PF known as Team Lacoste, and with some strategic war veterans. His team became embroiled in a bitter struggle for power with the younger party members popularly known as Generation 40, or G40, which coalesced around Secretary of Women’s Affairs Grace Mugabe, wife of President Mugabe.

According to Zimbabwe’s Central Intelligence Organization (CIO) report, Emmerson Mnangagwa, emboldened by Western powers which was subtly orchestrated by the British government, as early as 2015, began talks with opposition (MDC) leader Morgan Tsvangirai on plans to a five-year transition government, in which both men would play a leading role. It is alleged that, this was the reason why the opposition leader, Morgan Tsvangirai was hurriedly brought back from the United Kingdom to hold a press conference on the back of the military intervention to add his relevance to the process.

In furtherance, the unity government would compensate and restore dispossessed former British owners of large-scale farms, which in one report intercepted by the Reuters, it was reported that President Mugabe feared that Mnangagwa would attempt to reverse the land reform policy which is intended to secure the future wealth of Zimbabweans. These factors and the factional conflicts and maneuvering for power by Team Lacoste and G40, led to the sacking of Emmerson Mnangagwa.

However, Mugabe’s fears were confirmed by two prominent British political personalities at the time of the coup. The former British Ambassador to Zimbabwe, Mark Canning (2009-2011) indirectly approved the coup by saying that, “Zimbabwe has all the ingredients to claw its way back to the prosperity which its long-suffering citizens deserve – but only if Mr Mugabe’s successor has the courage to abandon the disastrous policies of the past.” (The Telegraph)

Meanwhile, Foreign Secretary, Boris Johnson wrote that Mr Mugabe had tarnished “the jewel that is Zimbabwe”. And “Today, in one of Africa’s most fertile countries, many are close to starvation; the image that people in Britain have of Zimbabwe is not of the Victoria Falls or spectacular wildlife, but stolen farms and the bandaged victims of the regime’s brutality”. (The Independent)

Nevertheless, Mnangagwa, entrenched himself with Mugabe’s political ‘enemies’ and the western governments opposed to Mugabe’s regime and lobbying for reforms of the land policy. Mnangagwa together with his friend Commander Chiwenga, and Army Generals backed by western powers and alleged to be tactically supported by the Chinese army set out the agenda to end Mugabe’s rule.

How the Takeover Was Orchestrated

On the 14th & 15th November 2017, the Zimbabwe’s Defence Forces led by Mnangagwa’s allied and friend, Commander Constantine Chiwenga took control of government facilities and broadcasting house. Seizing the broadcasting house was to prevent ‘opposition’ voices to the coup to be heard, shut Mugabe out of the media and render him incommunicado, and then control and regulate propaganda dissemination against Mugabe, Grace, and Generation 40 appointees and members of the ZANU-PF members.

After successfully denigrating the G40 members by orchestrating the media reportage, they could not announce the overthrow of Robert Mugabe for fear of possible AU and sub-regional sanctions against Zimbabwe and the coup leaders. The military including the western powers, started the process of legitimacy by activating the ‘urban streets’ of young opposition members as MDC’s support base is largely urban, and some few young ZANU-PF members seeking economic liberation to pour on to the streets. Robert Mugabe’s and ZANU-PF support base is largely rural.

The overhyped demonstration was used by some elements of ZANU-PF executives to gain legitimacy by using it as a ground in the absence of Mugabe’s supporters, to vote to expel President Mugabe from the party and in his place appointed Emmerson Mnangagwa as head of the party. Mnangagwa and his backers were out for vengeance, and ZANU-PF announced that Grace Mugabe and G40 members would be prosecuted. “This action still left the coup leaders without the means of legally installing Mnangagwa in power, so Mugabe was given a deadline of 24 hours to resign, or he would face impeachment on Tuesday.”

President Mugabe refused to buckle down and insisted on supervising his exiting process. The military leaders sensing danger that, they may not be able to convince the entire ZANU-PF members at the next conference to vote or affirm the vote of expulsion of Robert Mugabe, quickly set the process of parliamentary impeachment in motion to tighten the noose. The 93-year-old Mugabe, who was held hostage and without his reliable appointees, reluctantly resigned.

In 1888, representatives from Cecil Rhodes’ British South Africa Company deceived and induced an illiterate King Lobengula, of the Ndebele people to sign an agreement allowing the company to mine gold. This agreement granted the company “the complete and exclusive charge over all metals and minerals” in the region, as well as “full power to do all things that they may deem necessary to win and procure the same,” which the company was to interpret as permission to seize land. (Zimbabwe Under Siege)

Soon, the British South Africa Company realized gold was not to be found in commercial quantity. Its outpost in Mashonaland went into financial crises. Land became a more promising venture, and in October 1893 British troops and white volunteers invaded the territory of Matabeleland and inflicted heavy casualties on the Ndebele people. Under the Victoria Agreement, each white volunteer was entitled to 6,000 acres of land. There arose a mad rush and race to grab the best land, and within a year 10,000 square miles of the most fertile land had been seized from its inhabitants. In the process, white settlers confiscated Ndebele’s cattle and devastated the cattle-ranching industry and society of the Ndebeles.

The large tracts of land of the Ndebeles and Shona which was run by relatively few white settlers, required workers, and the Ndebele became forced labourers on the land they once owned and were treated as slaves. The Shona people also saw their cattle confiscated and were driven into poverty through the imposition of awkward taxes by the new British rulers. The uprising that lasted over a year by the dispossessed Ndebele and Shona in 1896 to retrieve their stolen land and cattle was crushed by the British at the cost of 8,000 African lives. The region was subsequently established as a new colony of the British and named Rhodesia in honour of Cecil Rhodes.

In 1899 the Native Reserves Order created reserves on the aridest land, on which the indigenous inhabitants were confined to. By 1905, nearly half of the indigenous population was cramped to the reserves. From 1930 onwards, no African was allowed to own land outside of the barren reserves. Between 1935 and 1955, the Rhodesian regime forced an additional 67,000 African families who were molested and forcefully evacuated at gunpoint from their homes and dumped at the reserves whiles their homes were flattened to the ground.

The Lancaster House Conference was convened in 1979 as the Rhodesian government was losing grip to maintain its colonial power. Land was the core issue for the liberation struggle, and the British and American negotiators ensured that independence could only come to the natives after imposing the following conditions. There was a provision that stipulated that for a period of 10 years, land ownership in Zimbabwe could only be transferred on a “willing seller, willing buyer” basis, which effectively restricted the extent of land reform. Secondly, settler whites were also allotted a parliamentary quota of 20 seats, far exceeding their actual percentage of the population.

The Beneficiaries of the Coup

President Robert Mugabe’s human weaknesses, as a result of his age, were not the critical factors that instigated the Coup. It only served as a catalyst to mislead the new generations that were not conscious of the Zimbabwean genesis and Mugabe’s legacies.

The land reform policy and disengaging from the IMF to pursue non-liberal market economy were the two major factors that resulted in the long attempted overthrow of the regime. The attempted ‘weaponization’ of the opposition party, MDC, the siege of sponsored pseudo-NGO’s to socially engineer the populace for regime destabilization and change, coupled with several years of economic sanctions by western powers were all attempts made to force Zimbabwe and Robert Mugabe to return to a neoliberal economic model in which the interests of Western capital would have primacy over the needs of its people.

For example, on December 21, 2001, President George W. Bush signed into law S. 494, the Zimbabwe Democracy and Economic Recovery Act of 2001. The law directs American officials in international financial institutions to “oppose and vote against any extension by the respective institution of any loan, credit, or guarantee to the government of Zimbabwe,” and to vote against any reduction or cancellation of “indebtedness owed by the government of Zimbabwe.”

The law also authorized President Bush to fund “an independent and free press and electronic media in Zimbabwe”. This afforded the US to illegally invade the media space of a sovereign African country to plant media that is opposed to the government of Zimbabwe. Six million dollars was granted for aid to “democracy and governance programs,” a euphemism for groups seeking to topple the government.

After Robert Mugabe survived all these attempts, the Western powers schemed to set his ignorant, and unintelligent wife, Grace Mugabe up for colossal internal damage and disaffection among power-hungry generals and veterans who consider Zimbabwe as their bona fide property and spoils of war.

The agenda of this orchestrated ‘democratic’ coup was not to put Zimbabweans at the centre of governance and economy. It is a fight over Zimbabwean land and rich resources by the West, and the new big player, China.
The coming days of Emmerson Mnangagwa shall be closely observed and analysed.