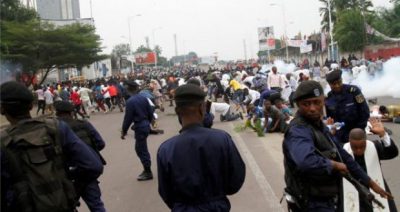 Police in the Democratic Republic of Congo have used teargas to disperse protesters, as a wave of demonstrations takes place across the country.

Protesters are demanding that President Joseph Kabila – whose expected term of office expired more than a year ago – should step down.

A number of people have been injured, and UN peacekeepers have reportedly been deployed in the capital.

Similar demonstrations three weeks ago led to a number of deaths.

The widespread marches had been called for by the country’s Catholic Church, which appealed for a large but peaceful demonstration.

The Congolese authorities, however, banned the marches and no formal permission was given. On Saturday evening, internet access in the capital Kinshasa was cut.

Police warned that they would not tolerate “any attempt to disturb public order.”

Despite the ban, protesters gathered after morning mass on Sunday to march through the streets, accompanied by members of the clergy.

Local media outlet Radio Okapi reported protests in Kinshasa, Kisangani, and Bukavu. Other cities remain quiet, it reports, though a heavy police presence has been seen in many places.

The UN mission in the country – which has been running continually since 1999 – said it deployed its troops to the streets to observe and record any violence.

President Kabila has been in power since 2001, and was supposed to step down after his second and final term came to an end in 2016.

Under a deal reached more than a year ago, he was due to step down by the end of 2017 – but that has not happened.

Instead, the election to replace him, originally planned for 2016, has now been delayed until December 2018.

The country’s powerful Catholic Church has been a voice of opposition to Mr Kabila. The Church also called for the demonstrations in late December which led to at least seven deaths, according to UN peacekeepers.

Dozens were arrested in the aftermath of those protests.

Sunday’s demonstrations were also backed by the country’s Muslim community. Before the march, representative Cheikh Ali Mwinyi M’Kuur told AFP: “I ask the authorities to avoid repressing the march.”

“If they decide to repress, there will be no peace. But if they let the march take place, they will respect the constitution and peace will prevail,” he said.