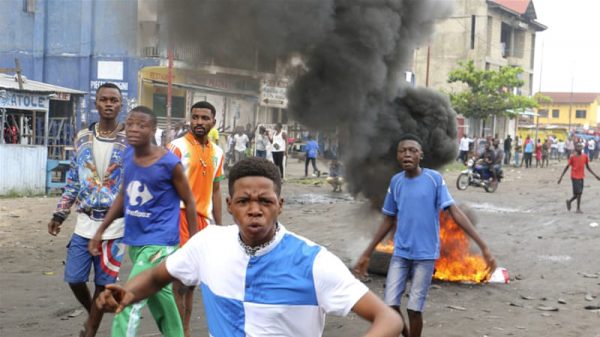 Civil society groups and human rights activists in the Democratic Republic of Congo (DRC) are calling for sustained pressure on the country’s president, after protests demanding Joseph Kabila step downturned deadly this week.

At least seven people were killed across the country on Sunday, after security forces reportedly fired tear gas, rubber bullets and live ammunition at demonstrators in the capital, Kinshasa, and other cities.

Organised by the Catholic church, the protests called for Kabila to step aside and allow for new elections to be held in the Congo – a demand at the centre of an agreement signed by the president and opposition politicians in 2016.

Several people were also injured in the violence, and security forces arrested at least 120 people, including religious officials.

Hubert Tshiswaka, a lawyer and director of the Institute for Human Rights Research in Lubumbashi, the Congo’s second-largest city, accused the government of deploying security forces with the intention of firing on protesters.

“It’s deplorable and irresponsible on the part of the government and the head of state,” Tshiswaka told Al Jazeera.

“We have information from our intelligence services indicating that criminals were going to infiltrate the protests and take advantage … We’re waiting for the [results of an] investigation,” Mende told France’s TV5 Monde in a telephone interview on Monday.

“We deeply regret that there has been loss of life, including a police officer,” Mende said.

But Tshiswaka said the deadly violence “comes within the government’s policy to repress all peaceful protests.

“The reaction should have been proportional. If you have bare-handed people in front of you … you cannot execute them, point-blank, because you suspect that people with arms are among them,” he said.

In a January 1 statement, the Congo’s main opposition groups, known as the Rassemblement (the Grouping, or Gathering), said Kabila and his government institutions had “lost all legality and all legitimacy”.

The group called on the international community and all Congolese citizens to no longer recognise Kabila as the country’s president.

The Front of the Respect of the Constitution (FRC), a coalition of Congolese political and civil society groups, also criticised the government’s “reckless behaviour” and accused it of disregarding the Saint Sylvestre Accord.

Signed in October 2016, the accord – agreed to by the president and opposition groups and brokered by the Catholic church – stipulated that presidential, legislative and provincial elections would be held “in December 2017 at the latest”.

But Kabila now says he intends to stay in power until December 2018 to account for delays in voter registration. The elections are scheduled for December 23.

Kabila spoke during a televised, end-of-year address on Sunday, but he did not directly mention the violence that occurred earlier that day.

Instead, the president called for citizens to work “to create real conditions of peace, hope and stability” that would allow the country’s national electoral commission to finalise voter lists and prepare for elections later this year.

But the FRC decried the multiple delays, noting in a statement: “Enough is enough.”

Michaelle Jean, head of the International Organisation of La Francophonie, called for “everything to be done” to prepare for the elections.

Holding timely elections that respect the country’s constitution and the Saint Sylvestre Accord, Jean said in a statement, is “the only way to definitively put an end to the ongoing transition and ensure stability and peacebuilding in the DRC”.

Kabila came to power in 2001 after the assassination of his father, Laurent-Desire Kabila, the country’s third president.

He was elected in 2006 in the country’s first democratic election since it gained independence from Belgium in 1960. Kabila secured a second term in 2011, though that election was plagued by allegations of widespread voter fraud.

Asked about Kabila’s future amid calls for his resignation this week, Mende, the government spokesperson, responded incredulously, telling a reporter with TV5 Monde: “Why do you need to know anything about his future?”

The Kabila government attempted to revise the Congo constitution in 2014 and proposed a new electoral law in 2015. Both measures were widely seen as part of an effort to allow the president to stay in power longer, but neither succeeded.

“The only strategy so far which works” for Kabila is to buy time “by not organising elections”, explained Kris Berwouts, a political analyst and author of Congo’s Violent Peace: Conflict and Struggle since the Great African War.

Today, Berwouts said, “the regime is aware of the fact that they can’t go ahead without elections.”

Delaying the vote “has its limits; you can’t do that eternally. It’s about credibility”, he added.

Kabila’s camp is divided, however, over what role the president can have going forward, while the country’s opposition remains weak and divided and frustration is growing at the grassroots level, Berwouts said.

“You have a divided regime and you have a population which wants to get rid of Kabila, and between that, you have a number of actors which struggle with their own legitimacy,” he said.

Many people living outside the Congo’s larger cities have the impression that “their daily living conditions did not change at all” in the 20 years since longtime Congolese dictator Mobutu Seko died, which is spurring their frustration, he added.

At least 1.7 million people were newly displaced in the Congo as the political situation deteriorated across the country this year, according to ACAPS, a Geneva-based think-tank that monitors humanitarian developments.

Kabila’s refusal to step down has triggered “an increase in violence and the development of new conflict dynamics”, the group said, especially in opposition strongholds like the Kasai region and North and South Kivu.

Michael Tshibangu, a UK-based political analyst and president of the Association for Development and Democracy in Congo, said the swift and forceful repression of Sunday’s protests “shows how determined [Kabila] is to stay in power”.

Despite his promise to hold elections this year, many fear the president will not relinquish control, he said.

“Everything we’re seeing today shows that the DRC is going backwards. Kabila is in the process of establishing a dictatorship,” Tshibangu said.

The government’s response to recent protests also demonstrates how difficult it would be to hold elections in the country right now, he told Al Jazeera.

If people cannot protest freely, Tshibangu asked, how can they be expected to exercise their right to organise political party meetings or campaign before an election?

Tshiswaka agreed, noting he expected protests to continue “because the government and the president have no intention of peacefully leaving power and the Congolese population will be increasingly frustrated”.

His fear now, he added, is that Kabila “is pushing the population into a corner such that … it will only be able to respond with violence”.