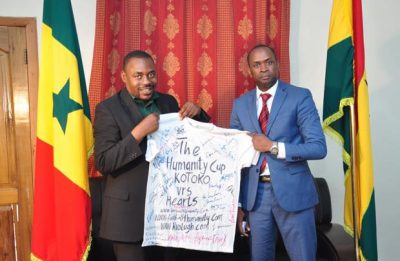 has said his country and the other African representatives for the Russian 2018 World Cup would make good representation for the continent.

In a ceremony to receive the Humanity Magazine International Award, for promoting healthy international relations on the continent, the Charge d’ Affair said “I can understand how Ghanaian soccer fans feel because they could not make it to the World Cup.

“They shouldn’t worry at all,   our flag and that of Ghana is almost the same so they should take consolation in that fact; just as we saw ourselves on Ghana when they played in South Africa.”

CEO of Humanity Magazine International,  Yahaya Alhassan, expressed gross  thanks to Mousa Khady, the Embassy, and the president of Senegal,  Macky Sall,   for their support for strengthening the cordial relationship between the two countries.

He said Senegal’s shining example of a peaceful and smooth transition in power from government to the other should be highly commended.

Khady Cisse urged Ghanaians to esteem the study of the French language because Ghana is surrounded by French speaking countries.

The Charge d’ Affair endorsed the Humanity Peace Jersey for the Hearts versus Kotoko Peace Cup to promote peace before and after Elections in Africa.