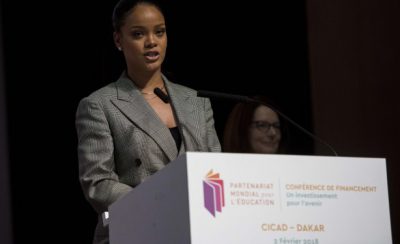 Emmanuel Macron and Rihanna may not usually move in the same circles, but the French president and pop star joined forces on Friday to champion education for the world’s poorest countries.

The pair urged world leaders and donors to scale up support for schooling at a financing conference of the Global Partnership for Education (GPE) in Senegal’s capital Dakar.

“This is a fight that we are never going to stop fighting until every boy and every girl has access to education,” said Rihanna, GPE’s global ambassador, to wild applause.

The Barbadian singer also called out presidents on Twitter – where she has 86 million followers – to honour their commitments in the lead-up to the summit.

“Supporting education is not a choice we can make or not make, it is a necessity,” said Macron, who co-hosted the event with Senegal’s president Macky Sall.

GPE aims to raise $3.1 billion over the next two years to ensure access to classrooms for 870 million children in 65 developing countries.

About 264 million children worldwide are missing out on school, according to the partnership. But the share of global aid going to education has been shrinking for over a decade, said the ONE campaign, a global advocacy organisation.

“Dakar should be a turning point for access to quality education,” said ONE’s president Gayle Smith in a statement.

The presidents of seven African nations also attended the conference and emphasized the importance of improving education on a continent where the youth population is exploding.

“We have the youngest population on the planet, on the richest continent with the worst living conditions,” Ghana’s President Nana Akufo-Addo told the conference.

“That paradox can only be broken by education.”