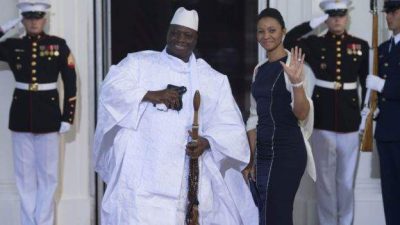 The president of Equatorial Guinea Teodoro Obiang Nguema has announced his resolve to ensure that former Gambian leader Yahya Jammeh is well protected.

This follows reports of a possible extradition of Jammeh to his home country to face justice for crimes he is alleged to have committed during his tenure.

Obiang Nguema said the African Union is opposed his extradition after forcing him out of power in 2017.

Jammeh has been living in exile in Equatorial Guinea since then under well protected system.

But he is accused of diverting state funds of about $50m into private account and also committing human rights abuses.

Obiang said “I believe that the stance of protecting former heads of state is a correct one.”

Obiang made this comment after meeting with African Union leader Alpha Conde, who is also Guinea’s president.

The Equatorial Guinean leader also said that African leaders “are in full agreement that Yahya Jammeh must be protected. He must be respected as a former African leader. Because this is a guarantee for other African leaders that they will not be harassed after they leave power.”