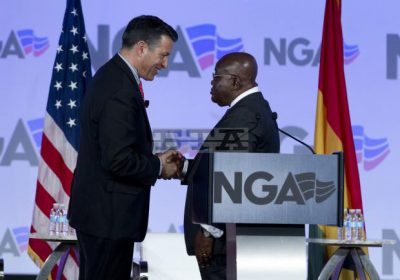 The president of Africa Eye Mr. Yahaya Alhassan , an online news portal  and think- tank to promote and wipe the wrong impression about the continent has condemn the action by the Nevada governor, Brian Sandoval  as a clear case of racism.

Speaking in an interview in Accra, Mr Alhassan questioned how the governor refused to exchange pleasantries with …; and has consequently described it as inhumane.

He described the stage shun of the   director of  State  protocol Mr. Hassan Ahmed   as an assault on the  dignity of every African which should  not be countenanced.

He wondered  if the governor would have done same to a state  official from developed countries like United Kingdom, Canada or Germany.

He said “What is wrong leading and accompanying one’s  president to the stage ?. That is exactly what Ambassador Hassan was doing as part of the protocol discussions prior to the President’s speech as we are made to understand.

“ Handshaking is a universal way of greeting and  in our culture, it would be snobbish to refuse to extend hand or reject hand,”   he added.

Mr . Alhassan described Mr. Ahmed  as a renowned Ghanaian diplomat ,a father  and family head who deserve every respect within and outside Ghana.

Lecturer at the university of Ghana  Business School Dr. Thomas Buabeng  said  if Mr. Hassan Hamid  was unaware of the protocol procedure and violated the rules, the governor should have found a more diplomatic and decorum way to address the situation considering the presence of the world media than just snubbing him.