Drogba, who moved as a child to France and spent most of his football career in Europe, was as a special guest at a concert by popular Ivorian music band “Magic System”, at the “Palais des Sports de Treichville”, an indoor sporting complex at the heart of Abidjan. The concert was part of a series of events taking place in the city on the eve of the Fifth EU-Africa Summit.

When I arrived shortly before the concert, the entire stadium was buzzing with excitement. People were chanting and cheering as they waited to see their favourite football star. But it did not take me long to realise that what I was witnessing was not just a concert. It was an EU-funded propaganda event against migration. 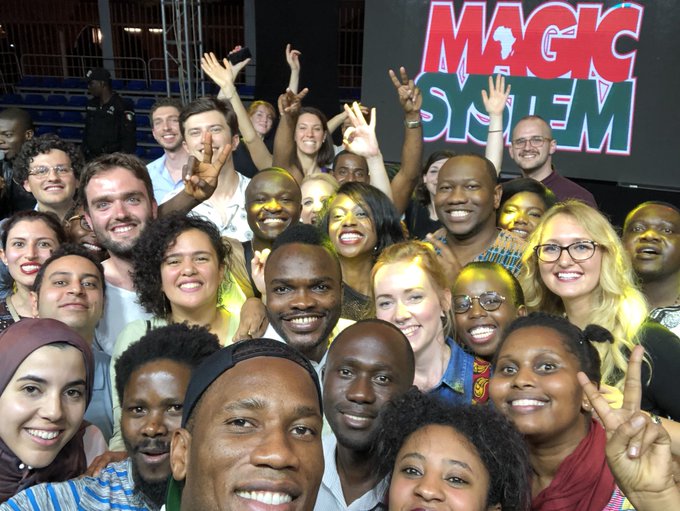 During the concert, band members, Drogba and other high-profile guests took turns addressing the crowd. And every single one of their speeches carried the same message: “You should not migrate.”

“Emigration is no solution to our problems,” said the lead singer of the band at some point. “The best way to be happy is to stay here with us.”

Today, so-called “sensibilisation and information campaigns” like this one are a key feature of Europe’s alleged fight against the root causes of migration. The EU Emergency Trust Fund for Africa allocates 1 million euros ($1.24m) for “raising awareness on the dangers of illegal migration”. Some member states spend their own money on similar events.

The “concert” was not the only “migration” themed side event of the EU-Africa Summit in Abidjan. A few days later, I found myself in the audience of a panel debate, at which eight people spent two hours discussing the root causes of migration without ever mentioning Europe’s role. The panel was organised by the French Institute and financed by the German foreign ministry. It was also supported by the International Organisation for Migration. According to the organisers, the aim of the panel was to take away the emotion from the debate about migration.

In reality, the panel was based solely on emotion.

If Europe really wanted to do something about “the root causes of migration”, such as creating jobs, reworking its own trade policies would be a good way to start.

There were sad images of mothers who had lost their migrant children, there were graphic photos of dead migrant bodies washed ashore on Mediterranean coasts, there were distressing images of migrant men being beaten by their captors in Libya, there were photos of disillusioned refugees being returned to West Africa on a plane … The message of the panel was quite clear: If you migrate, all of this will happen to you and it will all be your own fault.

The room was plastered with other “information materials”, driving home the same message. “No to irregular migration”, said the front side of the tote bags that hung on every other chair in the cinema that hosted the debate.

The other side of the bag said “My paradise is here”, alongside a map of the Ivory Coast. “The sea kills, the desert as well – no to irregular migration!” proclaimed a poster on the wall.

‘Your paradise is here’

The EU and its member states spend a lot of money telling young people in Africa how nice their continent is. Yet, they never mention the fact that EU trade policies are one of the main reasons behind the continent’s inability to offer attractive opportunities to its youth.

For example, the main export product of the Ivory Coast is cocoa. With an annual export value of $3.75bn, it makes up roughly one-third of the country’s total exports.

But, surprisingly, the Ivory Coast is not one of the world’s main exporters of chocolate – a product made out of cocoa.

The answer is simple: trade links and regulations that haven’t changed much since colonial times. The tariff regulations towards African states allow European countries to import cocoa beans without any additional charges. However, processed goods, such as chocolate, incur a hefty import surcharge, making it unprofitable to process cocoa in situ. The real profits, however, are generated not in growing the beans, but in processing them.

If Europe really wanted to do something about “the root causes of migration”, such as creating jobs, reworking its own trade policies would be a good way to start. Thousands – if not millions – of jobs could be created by allowing cocoa to be processed in West Africa. And cocoa and chocolate are just one example. With a simple change in trade tariffs, entire commodity chains could be established.

Africa has a young population that is rapidly growing, so jobs are urgently needed. The EU and the African Union acknowledge this challenge and pretend to work on it, but they show no interest in reforming European trade policies in a way that would allow job creation within Africa.

“Progressive” forces in Europe pretend to be fighting the root causes of migration, but, in reality, the measures they are taking are inefficient at best.

The narratives they use in their “fight against migration” simply gloss over the real issues and help retain the status quo, which, in this case, is hurting African economies, and contributing to keeping people poor and desperate enough to risk their lives seeking better living conditions.

If Europe simply reforms its predatory trade system rather than use football stars as propaganda instruments, Ivory Coast could well become a paradise with enough jobs for its youth.

The views expressed in this article are the author’s own and do not necessarily reflect Al Jazeera’s editorial stance.