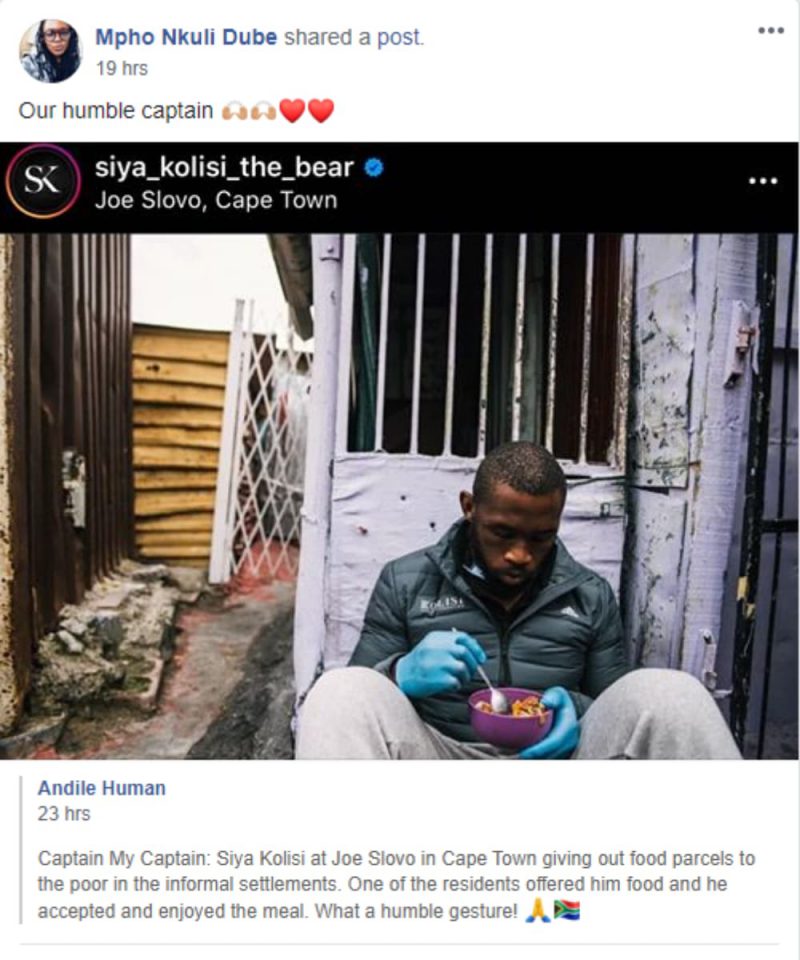 Africa Main Latest SA Sports News LATEST SA SPORTS NEWSMZANSI LATEST NEWSBUZZ Siya Kolisi’s humble act inspires SA again: “What we call humanity” 18 days ago 34909 views by  Claudio Leng – Springbok rugby captain Siya Kolisi was delivering food parcels in Joe Slovo township in Cape Town – One of the residents offered him a bowl of food and the way he graciously accepted the offer blew everyone away – An iconic image of the moment was shared and has gone viral via social media PAY ATTENTION: Click “See First” under the “Following” tab to see Briefly.co.za News on your News Feed! Springbok rugby captain Siya Kolisi has made a name for himself on the rugby pitch with his heroic and hard-hitting performances. Off the field, Kolisi is fast earning a reputation for his humility, kindness and generosity. The Rugby World Cup winner regularly gives back to the less fortunate through his Siya Kolisi Foundation and recently visited the informal settlement of Joe Slovo in Cape Town.

Kolisi and his team were delivering food parcels to the impoverished community when one of the residents offered him a bowl of food. Rather than refuse the offer or pretend and stash the food away, Kolisi warmly embraced it and enjoyed the meal right there. An iconic photo of the Bok captain sitting down on the ground to eat was captured and went viral via social media. Andile Human shared the below post via Facebook. Read more: https://briefly.co.za/67751-siya-kolisis-humble-act-inspires-sa-what-call-humanity.html?fbclid=IwAR0jpZlhq67-BjGvcHyQYs6Wf-3wAOPsxgkdt2t_Azd_KNkzh5WqTkjjWK0

Captain My Captain: Siya Kolisi at Joe Slovo in Cape Town giving out food parcels to the poor in the informal settlements. One of the residents offered him food and he accepted and enjoyed the meal. What a humble gesture! 🙏🇿🇦

Briefly.co.za also noted that Mpho Nkuli Dube was so touched by the news that she decided to share it via the #ImStaying Facebook group. More than 20 000 people have already liked the post and it’s attracted more than 1 000 comments. Slie Thabisa Ngcobo said, “What an inspiration you are Siya.” Robyn Kirk added, “So much respect for him and his wife. They’re inspirational.” Christian Botha responded, “You know out off all the springbok captains that has ever been before siya has the most respect from me as a person Read more: https://briefly.co.za/67751-siya-kolisis-humble-act-inspires-sa-what-call-humanity.html?fbclid=IwAR0jpZlhq67-BjGvcHyQYs6Wf-3wAOPsxgkdt2t_Azd_KNkzh5WqTkjjWK0