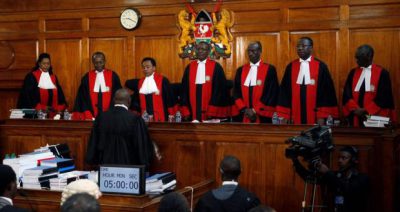 Kenya’s Supreme Court has annulled the outcome of the country’s recent presidential election.

Citing irregularities, the Supreme Court said a new poll should be held within 60 days.

But Kenya opposition candidate Raila Odinga claimed that the commission’s IT system had been hacked to manipulate the results.

The BBC’s Caroline Karobia in Nairobi says Kenya has made history as the first country in Africa to annul presidential election.

Reading the ruling – reached by a majority of four to two among the judges – Justice Maraga said the 8 August poll had not been “conducted in accordance with the constitution”.

After the announcement, opposition supporters were seen celebrating outside the court building, as well as in opposition strongholds