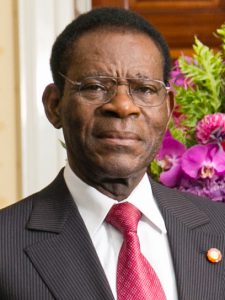 President Obiang on Equatorial Guinea achieving the highest per capital GDP for any country in Africa, Kovind said that India was keen to partner Equatorial Guinea which is diversifying its economy and reducing its dependence on oil and gas exports.

They stand as testimony to the city’s – the soon-to-be-replaced capital of Equatorial Guinea – long history, and its deep-rooted European heritage.

Visitors can come and stroll the streets to see the gorgeous neo-Gothic spires of the Cathedral of Santa Isabel, and enchanting little Spanish-esque casas along the neighborhood roads.

There’s also a university and a Cultural Center, ringed by a smattering of clubs and fried-plantain curry houses, all cascading down towards the clifftops above the Atlantic. And while the humid rainforests and gushing courses of the Uoro River here remain an off-the-beaten-track option, those who do come are reaping the rewards: empty trekking trails; personal safari packages, and an untainted experience of the African wilds – just three aspects that come to mind! There’s mile upon mile of maintained hiking paths here, along with more wildlife than you can shake an Equatorial peanut-butter chicken dish at. Clutching the rugged volcanic ridges of the Moca Valley on the southern edges of Bioko, the namesake town of Moca is a bucolic picture of wild Equatorial Guinea.

Home to the people of the Buki tribe, it sits almost in harmony with the great cloud-topped peaks that rise around it.

And talking of peaks, they are also the reason most travelers pass this way.

They come to hike to the craggy, monkey-dotted reaches of the Cascades of Moca, or to witness the shimmering blues of lakes Biao and Loreta, topping out in the old volcanic calderas on the highlands.

Bring the walking boots – this one promises to be outdoorsy!

No one can quite figure out why little San Antonio de Ureca hasn’t boomed with ecotourism yet.

After all, it was here, in the late 1990s, that Spanish conservationists first took it to the illicit trade of endangered turtle eggs; and won! Today, the same villager patrols are in place to police the sands and pebble beaches that ring the little village, helping to save the endangered sea turtles that make the Atlantic waters their home.

That’s not it though, because this little town of low-rise shacks and mud roads sits in the shadow of the mighty San Carlos Caldera, is imbued with gushing waterfalls, and surrounded by countless hiking routes to boot! Ebbing and flowing with the tide of political inclinations and oil booms, this onetime capital of Equatorial Guinea is now a standard stop off on the route through the country.

With more than 170,000 people calling it home, it’s by far EQ’s largest city; a fact reflected in the lively nighlife scene, and the buzzing fish and craft markets that coalesce each day around the port sides.

Bata Cathedral is the main sight, oozing a taste of Spanish character in the heart of town, while there’s also an airport and regular services to Cameroon and the city of Malabo by boat.

The provincial capital of Centro Sur is a place to glimpse the bustle of day-to-day life that carries on between the jungle-dressed hills that dominate the vast proportion of Rio Muni (the Equatorial mainland). Tin shacks and rain-buffeted palms line the streets, while a clutch of little drinking joints host crowds of chattering locals.

There’s also a local market that’s packed with multi-coloured veg and legumes and fruits plucked straight from the fields.

And if you’re looking to go outdoors, then the spot is also neatly sandwiched almost equidistance between the national parks of Monte Alén and Altos de Nsork! Long the chosen departure point for the countless tonnes of logs that stream down the highland highways from the forests that hug Caldera de San Carlos in the Bioko highlands above, Luba is now slowly developing into something much more.

Add to that the shimmering sands of Arena Blanca – the only white-sand beach on the island – and all the swaying coconut palms and salt-sprayed boulders that go with it, and it’s easy to see why!